Even pro triathletes have to start somewhere. This is how I started…

I needed a goal. I was chubby, unhealthy, unhappy, and only 25 years old. Being athletic in my high school and college career, I realized I needed to try something new to help me focus on being healthy again. After a lot of consideration, I signed up for my first triathlon in February 1997.

That February, I made a commitment to compete in the St. Anthony’s Triathlon in Tampa, Florida, only two months after my “start to train” date. I did this purposely. I needed a goal that wasn’t too far in advance. But I also needed to make sure that I stayed on task with my training and my goals. 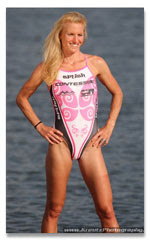 The first thing I did was hire a coach. I knew I needed some assistance in learning the “ropes” of triathlon. I had never swum in my life. I mean I could possibly save myself if I had a life preserver strapped on, however, I didn’t know proper technique. My coach invited me to join the masters swim program. After day one, I was hooked. I’m not sure exactly why as I look back on that fateful day. I was splashing around in a cold pool at 5:30 in the morning. I was kicked. I was yelled at. I nearly drowned. I didn’t know anything about pool etiquette. In fact, before workout that morning, I informed coach that I could swim 1500 meters in 19 minutes. I believed this because at the time my college boyfriend swam a 15:39 in the 1500 at the Olympics. In my mind, 19 minutes was equivalent to a 10-12 minute mile on the track. I was SO WRONG! Nevertheless, my coach helped me to believe that I could actually finish a triathlon.

I trained so hard leading up to the race that I was very tired every single day. I celebrated my days off on Mondays! As the day of the race quickly approached, I was more nervous than ever. However, I was determined. I was determined to race as hard as I could. And I was determined to finish! Coach and I talked about everything before I left for Tampa (from Baltimore). He encouraged me to have a bike shop look over my bike before I raced. He told me what time to eat the morning of the race, as well as what to eat. He told me exactly what sort of times I should be expecting for each segment. I felt very encouraged to have this much support. As I arrived, I followed everything he told me to the “T.” However, I do wish he had told me to not eat a huge steak the night before the race. That was definitely a rookie mistake!

As the gun went off, my heart nearly stopped! But then my competitive juices took over and the feelings of being scared and nervous disappeared! I was in the mix of all of the kicking and scratching for an entire 30 seconds before everyone seemed to disappear. I was alone – swimming along for 1500 meters. I kept on encouraging myself to keep going. I could do it! It took me 36 minutes to swim the distance – I did it! Now off for the bike!

The bike seemed to be the most effortless of all. I loved the feeling of going fast. I could really push myself! Unlike the swim, I could work really hard and feel like I was going somewhere. I was pushing as hard as I could possibly go!

As I entered the second transition, I knew that I had the run in the bag! What I didn’t anticipate, however, is what my legs would feel like after getting off the bike after riding so hard. I hadn’t pushed myself to the limit on the bike like that, so when I got off I just wanted to lay down! I was so tired! Through the run I lumbered, I struggled, I walked, but I worked as hard as I could to finish. My run time (for the 10K) was 55 minutes! I was ecstatic! I had finished my very first triathlon! I was absolutely hooked!!!

I never would have thought that 11 years later I would be doing this as a professional and telling the story of how I first started. It just goes to show that if you put your mind to something and if you make goals for yourself, you can do anything! Go for your dreams!